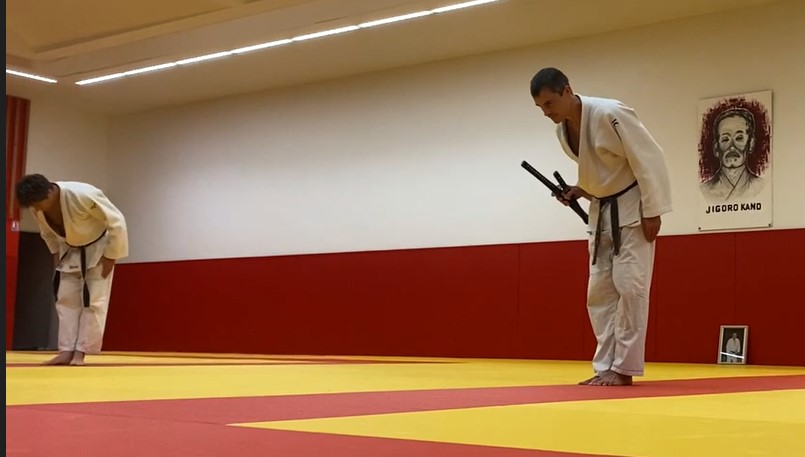 While the arts of combat are present in most cultures around the world, they have never reached such a degree of development and sophistication as in Japan.

The Japanese, unlike other populations of Asia, preferred to adopt a defence system with bare hands, rather than techniques of percussion.

Also, the traditional Japanese martial arts are represented mainly by two great currents of martial arts, Aikido and Ju-jitsu and consequently Junomichi which is a highly specialised form of Ju Juitsu (Original Judo).

It originated from the island of Okinawa (Japanese island). It was not introduced in Japan until the beginning of the 20th century. Still, if the aikidoka faces his opponent at a distance of grasp, the ju-jitsuka practices the fight in hand-to-hand combat.

Originally developed by the “samurai”, Ju-jitsu and Junomichi (ju: flexibility, jitsu: technique, michi like do means the way) include a wide range of techniques of throwing, locking, and strangulation, whether for combat standing or on the ground.

On the other hand, percussion techniques (with hands or legs) are rare and direct but effective (they aim to strike the pressure points), see kyusho (kyuushoo).

Throws, using the principles of lever and pendulum, involve the violent fall of the adversary on the ground, which constitutes the virtual end of the fight.

Locks and strangulations are used to put out of action or subdue an assailant, with or without prior throwing.

The keys are of two kinds, in torsion (dislocation) or in extension (rupture) of the joint, and apply either to the arms (shoulder, elbow, wrist), or to the legs (knee, ankle, foot), even in the neck (cervical vertebrae).

Some controls are done on muscles (biceps, quadriceps), by applying pressure.

Finally, blood strangulations (there are also respiratory strangulations which do not have the same consequences) aim to cause temporarily lost of conscious (for at least thirty seconds, no more, otherwise…).

These latest techniques are not intended to suffocate the person, but to cut off the blood flow to the brain. These strangulations do not lead to the death of the person, or sequelae provided you have safe control and are being very careful.

By the nature of the techniques, Ju-jitsu and then Junomichi are particularly interesting martial art. Its effectiveness is essentially based on its technical quality, unlike the arts of percussion (such as Kung-fu or Karate), where the strength of both the person giving the blows and the one receiving them are essential factors.

However, despite its technical richness and its formidable reputation, traditional Ju-jitsu began to disappear from the Meiji era (1868-1912).

Today, therefore, even in Japan, this art remains rare.

Also: it is important that today, Brazilian Jujitsu, Sambo and Sports Judo are sports by no means martial arts. 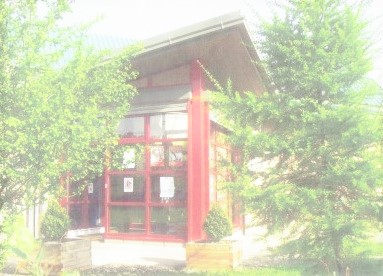 For Beginners (and not beginners)

You can make as many sessions as you wish for free until you decide to take a commitment.

It takes time to make a such decision.

UCHIKOMI (striking, going towards, inside) aims to create sensations through repeated movements.

Over and over, it aims to take away, the elements which hinder the freedom of action of the HARA.

By the continuity of the movements, with a progressive elimination of constraints, by becoming aware of his/her own physical oppositions, by gradually feeling judo’s purpose through the use of techniques, the original judo (or Japanese jujitsu) practitioner models his/her body.

During the UCHIKOMI, Tori strives, to solicit UKE as little as possible.

UKE, is also very active by focusing on his/her own control and availability.

Repeatedly receiving TORI’s actions, UKE develops more and more sensations by the movement. UKE must remain focused, free and alert to perform UKEMI at any time. 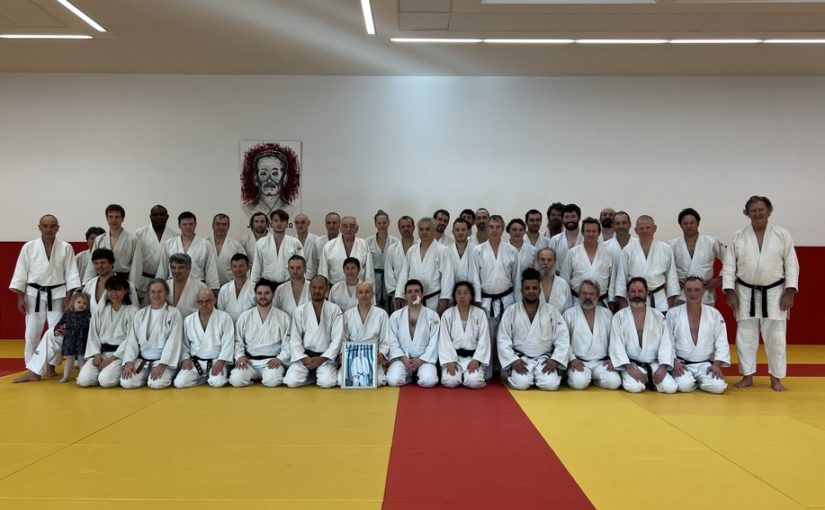 Our federation of Original Judo (FIAJ) was celebrating the Kagami Biraki to welcome our beings into this newborn year 2023.

The theme for this important moment was Koshiki No Kata.

During this celebration, we approach this ancient kata as the symbol of the circle of life through an infinite movement.

The apparent stops represent the uncertainty in life where we remain suspended. Tori and Uke are then, floating before the Ukemi in order to feel the pleasant sensation of « No Gravity ».

Life is driven by ongoing momentum. its power is the reflection of our commitment to this life.

Centuries ago, this ancient kata was a tool for warriors. Dr Kano, saw that once the concept of killing is put aside, Uke might represent Tori’s past life and the difficulty to control the inner energy.

Tori, know that this fire has to be tamed in order to be transformed into constructive power.

The Koshiki No Kata, within this approach, can be seen inside the Kime No Kata, Nage No Kata, Ju No Kata, Randori and also within the Shiaï.

Shiaï was a very important part of our ceremony. During this moment, we could clearly feel the impact of studying Koshiki No Kata.

We could feel what type of person we are, with no possibility of hiding our minds.

Decades ago, he moved away from Sports Judo to join Igor Correa Luna in order to retrieve the Original Judo (Junomichi) created by Dr Kano.

This very important event took place in Epernay in France for 2 days. 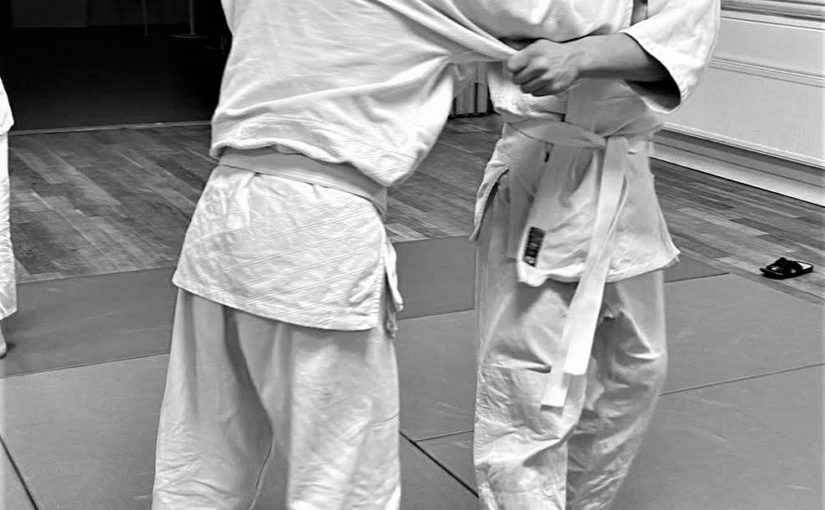 Autonomy in Original Judo-Jujitsu (Junomichi). The main tool to learn autonomy is

The external eye of the teacher or another person becomes more and more no longer required for work.

This external help is not excluded but the correction of the visible part of the gesture must be constructed with the internal sensation of movement.

This freedom allows practitioners to work without waiting for the teacher’s remarks, or even without their teacher. 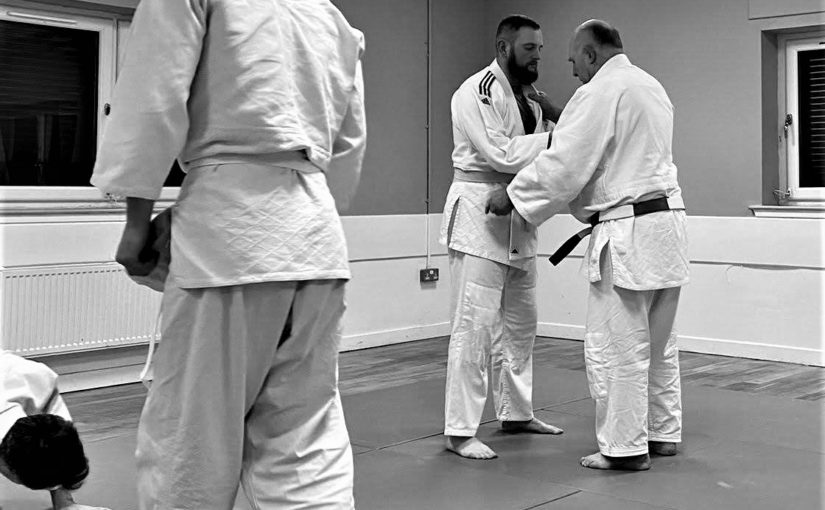 Sharing is taking an interest in sensations and sharing one’s research with others.
The sensations of projection and release are refined with a partner who cannot remain the same.

Progressing in Original Judo (Junomichi) means working and researching with everyone, regardless of size, level and mood.

The “little ones” as well as the “big ones”.

Sharing is learning to work and getting to know all the people who practice with you, whom I meet during weekday classes, during a normal daytime class and during a seminar or workshop.

The sharing of sensations cannot be done without conviviality, without the desire to value oneself as a better human being.

On Wednesday the 14th of December 2022, Judo-Junomichi School Scotland, during the class Original Judo and Jujitsu for beginners, we said goodbye to this year with sustained practice and a glass of friendship.

We will celebrate the Kagami Biraki with our federation in Epernay (France) on the 2nd and 3rd of January. During these 2 days, we will have the opportunity to study the essence of Original Judo (Junomichi) and get ready for Randoris and Shiaï by thorough practice of the Juno kata and Koshiki No Kata.

Some representatives of Judo Junomichi School Scotland will be there.

Then back, we will celebrate our Kagami Biraki during the class on Wednesday, 11th January.

If you are not a member of Judo-Junomichi School Scotland and wish to attend this special new year session, you are welcome to register here.

Tori takes control and throws Uke, not by opposing but by following the direction of Uke’s action.

Despite the appearances, it is not UKE who decides to attack, it is TORI who encourages UKE to do so. Tori takes control as soon as she/he walks towards UKE, even before the Kumi kata.

The Go No Sen No Kata was created by Kyzo Mifune.

His sequence was formalised by Mikinosuke Kawaishi.
Igor Correa contributed to making it sober and direct by giving it a Sen No Sen form.

This kata can be performed in the simple Go No Sen form, or the Sen No Sen form.

Sen No Sen is the most accomplished way because it is led by the notion of URA, it allows Tori to be in the intention of Uke’s attack before it happens 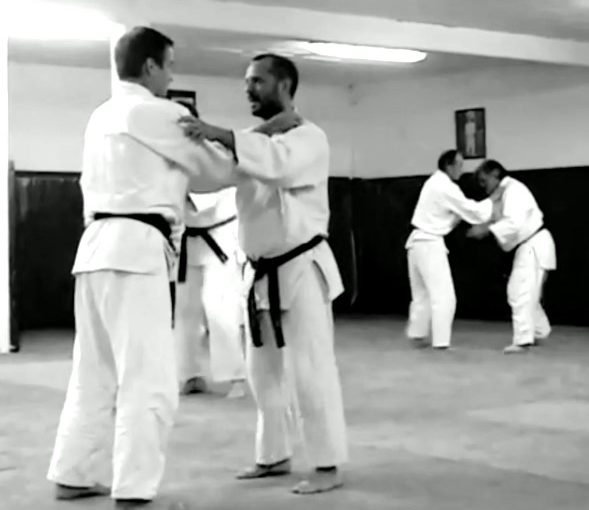 The full commitment within Judo starts with Shizen Tai.

In Sports judo, people are constantly bent over. There are 3 possible reasons for this position: Afraid of falling, Afraid of losing, and afraid of not getting a medal.

The main principle is the Shinzentai position.

Judo is a martial art and not a sport, it means this could be used in extreme situations in order to remain alive.
Therefore, the person removes all the possible stress in order to react quickly and be aware of the aggressor’s reactions before it happens (personal and life experiences as well).

If I bent over and use my muscle, I might lose my life quickly.

Now take away the stressful situation. What is left?
A wonderful tool to learn how to know myself with the help of a partner.

For this, there are 3 main tools, katas which lead to Randori and then Shiaî.

No loser, no winner but a full commitment to myself.

“Shizen Hontai is the posture where the individual stands naturally upright., without any intention. Elbows drop naturally, the chest is dropped without forcing it, the gaze is not lowered, heels are about a foot apart between right and left.“

Shizen Tai is the stable posture closest to imbalance

The centre of gravity is high, the supports are only about shoulder-width apart. However, it is from an imbalanced posture that we can create movement.

It is therefore the closest posture to movement.

Shizen Tai allows you to move faster, which is essential from a martial point of view. The person can quickly react by perceiving the other person’s reaction, even before they occur (Sen No Sen).

A position such as Jigo Tai, for example, although not leaning to either side, is effective in defence by lowering the centre of gravity, but, does not allow rapid change or direction or intention.

“…I say a word about attitude: I would like practitioners to practice Shizen-Tai ordinarily. In randori, it is certainly not possible to remain permanently in Shizen tai because it is undoubtedly necessary to switch to jigo-tai to protect oneself but, when one does not practice the principle of shizen-tai, it is not only the form of the body which becomes bad one comes to the point of not being able to move the body in a completely free way.

On the other hand, is jigo-tai the most suitable position for defence?
Certainly not!

It is sometimes relevant to defend against certain types of attack but it often happens that it is of no help against others.

When standing in shizen-tai, one seems vulnerable to attacks that can come from all directions but, at the same time, regardless of the direction of the attack, it is possible to dodge the attack easily.

On the other hand, it is easy to attack in Shizen Tai because this is a natural position”

It is essential, to preserve the ability to move and to always return to the shizen-tai position.

” The body must be in shizen tai posture. It is an attitude that allows you to change your attitude according to your needs. “

Chris Cameron, Tony Henry, Louise Baker, and Scot Mc Millan made a demonstration of their knowledge and Goshiwhat they could also invent to create their own approach.

hey have reached the step towards the 5th Kyu (Yellow belt) which is:

– Presentation of 20 minutes of personal creation in Judo (Junomichi) and Jujitsu (Tori – the giver and Uke – the receiver).

– The understanding of the Ukemis ( The receiving body)

– The capability of helping the partner.